T shirts with the LGBTQ flag sash and red ribbon come in two colors. Shirt has a unique texture and made using a thick microfiber knit fabric. T-shirt wicks perspiration rapidly away from the skin, drawing it to the surface where it quickly evaporates for those hot days at the parade.

The red ribbon is the universal symbol of awareness and support for people living with HIV. Wearing a ribbon is a great way to raise awareness on and during the run up to World AIDS Day.

The LGBTQ flag represents the lesbian, gay, bisexual, transgender, questioning/queer, asexual, and all other identities that fall into the LGBTQA+ community. LGBTQ flag was created by Gilbert Baker, and first flown in the San Francisco Gay Freedom Day Parade on June 25, 1978. The original flag consisted of eight horizontal stripes, pink, red, orange, yellow, green, turquoise, indigo, and violet, but pink was removed after a year due to fabric shortages. It’s been rumored that Baker might have been emulating the song “Over the Rainbow” by Judy Garland (one of the first gay icons), the Stonewall Riots, or based off a flag for world peace flown at campuses nationwide in the 1960’s. Baker’s life changed when he met the first openly gay politician, Harvey Milk in 1974. Milk challenged Baker to come up with a symbol for the gay community in 1977. After Milk’s assassination on November 27, 1978, demands for the LGBTQ flag rapidly increased. The rainbow flag has grown immensely in visibility and acceptance and is now widely accepted as the predominant symbol for the LGBTQA+ community. Also in June 2015, the Museum of Modern Art (MoMA) acquired the original flag. Gilbert Baker died on March 31, 2017, but his legacy will always live on. 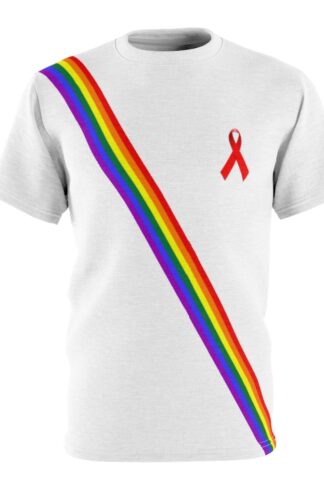