The LGBTQ flag backpack has room for all that. Roomy and durable backpack features spun polyester weighting 1.3 lbs, just enough to be light, yet strong and long lasting. Grab it, stow it, throw it onto the seat next to you, this backpack can take it, and so will you, wherever you go to create community and honor the history of the movement in protest marches held in major cities around the country. Celebrate the first anniversary of Stonewall, a pivotal movement in LGBTQ social movements in Chicago, Los Angeles, New York City, and San Francisco.

LGBTQ flag on the backpack represents the lesbian, gay, bisexual, transgender, questioning/queer, asexual, and all other identities that fall into the LGBTQA+ community. LGBTQ flag was created by Gilbert Baker, and first flown in the San Francisco Gay Freedom Day Parade on June 25, 1978. The original flag consisted of eight horizontal stripes, pink, red, orange, yellow, green, turquoise, indigo, and violet, but pink was removed after a year due to fabric shortages. It’s been rumored that Baker might have been emulating the song “Over the Rainbow” by Judy Garland (one of the first gay icons), the Stonewall Riots, or based off a flag for world peace flown at campuses nationwide in the 1960’s. Baker’s life changed when he met the first openly gay politician, Harvey Milk in 1974. Milk challenged Baker to come up with a symbol for the gay community in 1977. After Milk’s assassination on November 27, 1978, demands for the LGBTQ flag rapidly increased. The rainbow flag has grown immensely in visibility and acceptance and is now widely accepted as the predominant symbol for the LGBTQA+ community. Also in June 2015, the Museum of Modern Art (MoMA) acquired the original flag. Gilbert Baker died on March 31, 2017, but his legacy will always live on.

Made in the USA. 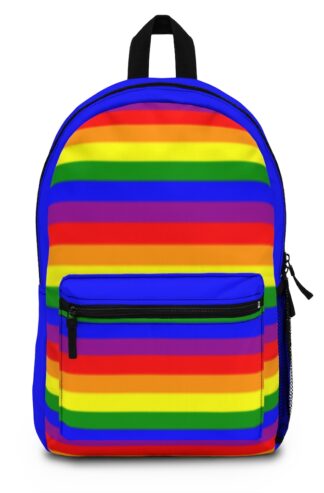 You're viewing: LGBTQ Flag Backpack by Rainbow Gumbo $62.18
Select options
Have no product in the cart!
0